The MIT Technology Review recently posted an interesting demonstration about how ideas and beliefs in social networks can look more prominent than they actually are. See The Social-Network Illusion That Tricks Your Mind. 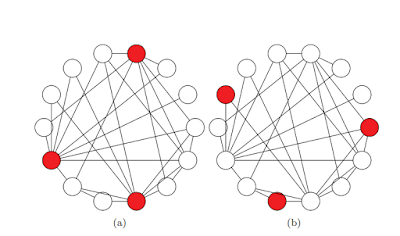 The explanation is rather straightforward: "... Lerman and co have discovered a related paradox, which they call the majority illusion. This is the phenomenon in which an individual can observe a behavior or attribute in most of his or her friends, even though it is rare in the network as a whole.

They illustrate this illusion with a theoretical example: a set of 14 nodes linked up to form a small world network, just like a real social network (see picture above). They then color three of these nodes and count how many of the remaining nodes link to them in a single step.

But here’s the thing: the structure of the network is the same in both cases. The only thing that changes is the nodes that are colored.

This is the majority illusion—the local impression that a specific attribute is common when the global truth is entirely different."

There are a lot of important lessons here that may be extendable to the extreme polarization in the American politic, among other things, especially since the illusion may also be exaggerated by the specific friends we keep and their role in influencing our own representations of reality on social media.

For those who are interested in such things, I'm considering offering a seminar on Networks and Network Analysis next Fall. This will be a nice companion to the Complex Systems seminar I will be teaching next semester.
Posted by Unknown at 3:47 PM