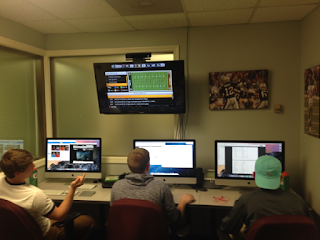 Projects for our internship teams are undertaken in the Cognitive Science Modeling Lab (CSML), which is equipped with three 27" quad core iMacs, two of which are running at 3.2 GHz with 16 GB or RAM and plenty of storage space. Two of the computers are operated with a bluetooth trackpad and one with a mouse.

Overhead hangs a 40" Samsung smart television wired to an XBOX One with a Kinect unit (visible above the TV). The primary use of the XBOX at this time is to study the game of football by running simulations using Madden 16. 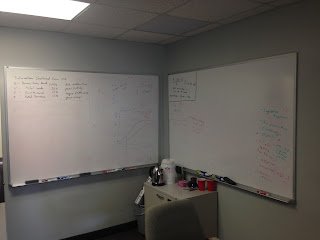 The lab also has two white boards, which are used for planning mostly and working out math problems. To allow several students the opportunity to use the board, students will take photographs of the state of the boards after their work so they can pick up later where they left off.

(You might also notice the hot pot on the small filing cabinet. This is available for all lab workers to make coffee and tea. Treats are available in the top drawer of the cabinent while they last. We have an open drawer policy - anything in the cabinent can be consumed by anyone, and the occassional generous lab worker will drop off treats for the others.) 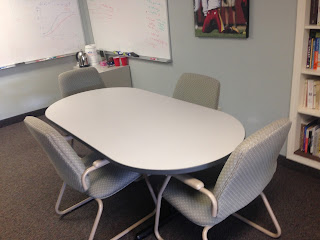 Many students work around the conference table on their own labtops. The table is useful for laying out data print outs to inspect them for patterns, and of course the table is used for meetings.

Students have 24/7 lab access, and many will use the lab for a quiet place to do homework from other classes when they are not working on the football project.
The general hope with the lab is to create a friendly environment for educational play with an eye toward self-motivated discovery and problem solving.
Posted by Unknown at 9:12 AM